The rosiest take on the jobs report is that the aging of the country’s population has made the employment statistics look worse than they really are.

That rosy take, in brief, goes like this: Yes, the percentage of Americans with jobs may not have risen much in the last couple of years. But the unemployment rate has fallen substantially during that time, and the unemployment rate is a better measure of the health of the labor market because its calculation excludes people who have stopped looking for work. With more people aging into retirement – the leading-edge baby boomers are now in their late 60s – it’s perfectly natural for more people to have stopped looking for work. The fact that the percentage of adults with jobs has held steady, rather than declined, is a sign that the economy is getting healthier.

To figure out whether this take is basically correct (and whether those of us emphasizing the lack of increase in the employment-population ratio have been too downbeat), you can look at the employment-population ratio for people 25 to 54 years old. They are in the prime of their working lives, old enough to have graduated from high school or college and young enough not to be retired.

Not surprisingly, a larger share of this group is employed than is the case for the overall population: 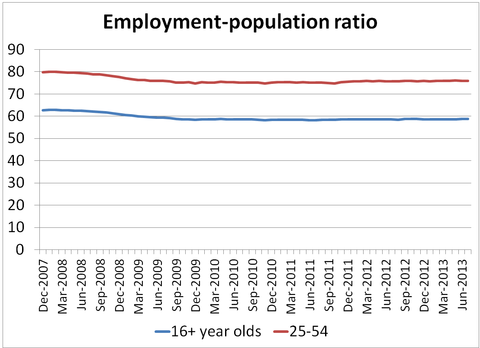 And the trend in the overall employment-population ratio does make the job market look a little bit worse than it truly is. As you can see in the chart below, the ratio for people between 25 and 54 has not dropped as much as the overall ratio since the downturn began in late 2007: 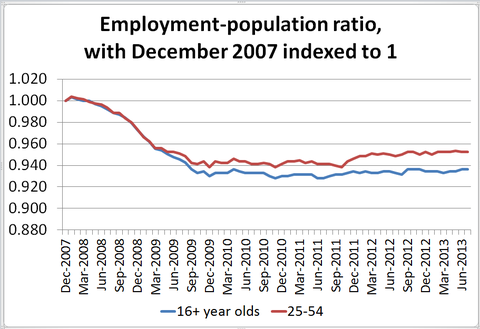 Yet it’s hard to take too much comfort in this chart. The percentage of prime-age Americans with jobs fell sharply during the 2007-9 downturn. It did not budge from 2009 through mid-2011, before rising somewhat in late 2011. In the last year and a half, it has not risen much further.

The fairest conclusion seems to be that the economy really is weaker than the declining unemployment rate suggests. The aging of society should indeed change the way we think about jobs numbers – causing us to look more brightly on a gain of, say, 150,000 jobs and an unchanged employment-population ratio than we would have a decade or two ago. But the aging of the country isn’t the main story. The economy’s continued weakness is