IN the spring of 2004, during my senior year of college, I faced a hard decision about my future career. I had a job offer from Microsoft and an acceptance letter from the computer science doctoral program at theMassachusetts Institute of Technology. I had also just handed in the manuscript for my first nonfiction book, which opened the option of becoming a full-time writer. These are three strikingly different career paths, and I had to choose which one was right for me. 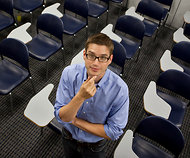 Cal Newport, a computer science professor at Georgetown, says many people lack a “true calling” but have a sense of fulfillment that grows over time.

For many of my peers, this decision would have been fraught with anxiety. Growing up, we were told by guidance counselors, career advice books, the news media and others to “follow our passion.” This advice assumes that we all have a pre-existing passion waiting to be discovered. If we have the courage to discover this calling and to match it to our livelihood, the thinking goes, we’ll end up happy. If we lack this courage, we’ll end up bored and unfulfilled — or, worse, in law school.

To a small group of people, this advice makes sense, because they have a clear passion. Maybe they’ve always wanted to be doctors, writers, musicians and so on, and can’t imagine being anything else.

But this philosophy puts a lot of pressure on the rest of us — and demands long deliberation. If we’re not careful, it tells us, we may end up missing our true calling. And even after we make a choice, we’re still not free from its effects. Every time our work becomes hard, we are pushed toward an existential crisis, centered on what for many is an obnoxiously unanswerable question: “Is this what I’m really meant to be doing?” This constant doubt generates anxiety and chronic job-hopping.

As I considered my options during my senior year of college, I knew all about this Cult of Passion and its demands. But I chose to ignore it. The alternative career philosophy that drove me is based on this simple premise: The traits that lead people to love their work are general and have little to do with a job’s specifics. These traits include a sense of autonomy and the feeling that you’re good at what you do and are having an impact on the world. Decades of research on workplace motivation back this up. (Daniel Pink’s book “Drive” offers a nice summary of this literature.)

These traits can be found in many jobs, but they have to be earned. Building valuable skills is hard and takes time. For someone in a new position, the right question is not, “What is this job offering me?” but, instead, “What am I offering this job?”

RETURNING to my story, I decided after only minimal deliberation to go to M.I.T. True to my alternative career philosophy, I was confident that all three of my career options could be transformed into a source of passion, and this confidence freed me from worry about making a wrong choice. I ended up choosing M.I.T., mainly because of a slight preference for the East Coast, but I would have been equally content heading out to Microsoft’s headquarters near Seattle. Or, with the advance from my first book, I could have hunkered down in a quiet town to write.

During my initial years as a graduate student, I certainly didn’t enjoy an unshakable sense that I had found my true calling. The beginning of doctoral training can be rough. You’re not yet skilled enough to make contributions to the research literature, which can be frustrating. And at a place like M.I.T., you’re surrounded by brilliance, which can make you question whether you belong.

Had I subscribed to the “follow our passion” orthodoxy, I probably would have left during those first years, worried that I didn’t feel love for my work every day. But I knew that my sense of fulfillment would grow over time, as I became better at my job. So I worked hard, and, as my competence grew, so did my engagement.

Today, I’m a computer science professor at Georgetown University, and I love my job. The most important lesson I can draw from my experience is that this love has nothing to do with figuring out at an early age that I was meant to be a professor. There’s nothing special about my choosing this particular path. What mattered is what I did once I made my choice.

To other young people who constantly wonder if the grass might be greener on the other side of the occupational fence, I offer this advice: Passion is not something you follow. It’s something that will follow you as you put in the hard work to become valuable to the world.

Cal Newport is the author of “So Good They Can’t Ignore You.”